How Do You Measure Sales Management?

This post originally appeared here in the ATD blog.

In some ways, the sales force is the most measured function in any company. All salespeople have a number (a quota) assigned to them, and progress toward that number is tracked maniacally. However, anyone who has ever tried to measure the ability of a sales team knows that this number is insufficient to determine whether a seller is actually good or bad at their job. But if you really want a challenge, try to measure the performance of the salesperson’s boss—the frontline sales manager.

I’ve worked in many organizations where sales manager performance was not really in focus. While their sellers were studied with great interest, the managers were a performance measurement afterthought. And when the sales managers were evaluated, it was typically a very blunt metric: the collective performance of their teams against their aggregated quotas. So if a manager has a team of 10 salespeople, each with a $1 million quota, the manager’s target becomes $10 million. A “good” manager hits that number, and a “bad” manager misses it. But is that really a fair assessment of a sales manager’s worth?

Vantage Point Performance recently studied more than a dozen sales forces in our Fortune 1000 clients to understand more about sales manager performance. The results were quite interesting. We first divided the sales managers (518 in total) into three groups, according to that classic metric of their collective performance against their aggregated team quotas.

The chart below illustrates the relative performance of each group. 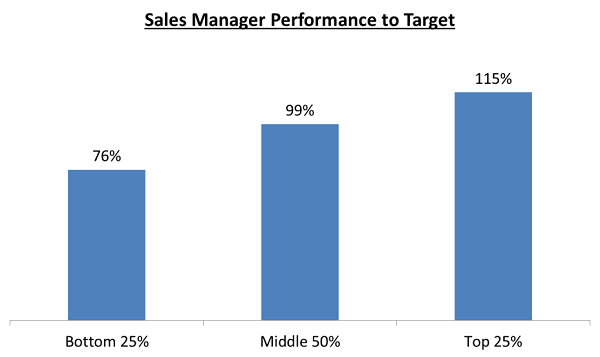 As you can see, the bottom performers achieved 76 percent of their team’s overall quota, while the middle group came within inches of their goal. Remarkably, the top performing group achieved 115 percent of their targets—a whopping 39 percent greater output than their low-performing peers. By this measure, we might reasonably conclude that the bottom managers are the worst, the middle are okay, and the top are truly superb. But is that the real story?

We also assessed the sales managers’ performance using a less common metric: the percentage of each manager’s reps that achieved their individual quotas. This reveals what portion of each sales manager’s team hit their own targets, not whether the team hit their overall number. Our assumption was that we would see a fairly linear relationship among the bottom, middle, and top performers—just as we did with the more blunt metric of overall team achievement. Boy, were we wrong. 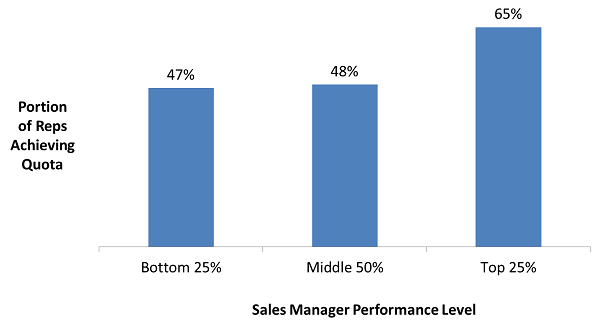 As you can see from the chart above, the “bottom” and “middle” performers were not that differentiated when judged by this more granular metric. In fact, their performance was almost identical, with both groups’ teams seeing just under half of their sellers achieving their individual quotas. Less than half! So what is going on here? What is the source of these two conflicting stories of sales manager capability?

There are two possible explanations for why the middle group achieved substantially more of their teams’ targets while realizing roughly the same prevalence of individual success. First, there are probably a handful of rock star salespeople in the middle group, making their team performance look more impressive in sum. Second, the middle-performing managers could be out in the field selling themselves, racking up extra revenue as player-coaches.

In our opinion, neither of these explanations is acceptable. We believe the role of a sales manager is to elevate the performance of the entire team by developing the capability of every salesperson. The goal is not to ride on the backs of a few superstars, or to fill revenue holes by taking to the streets themselves. The job of a sales manager is to develop people, and this more nuanced performance metric reveals whether managers are actually any good at doing their jobs.

So how does your organization measure the performance of its sales managers? Is each sales manager making every salesperson better, or do your managers just make their number in any way they can? Are a handful of great salespeople disguising mediocre management, or do you know exactly which managers are doing their jobs? The answers to these questions matter not only to your organization, they matter to the individual salespeople who deserve a better manager.